The goals for this season are:

1) To excavate the site of Kom el-Khamaseen, and to recover, catalogue, restore (most important items), and study the archaeological, epigraphical and iconographical material scattered on the surface, found inside the removed sands, or still in place.

2) To survey and study some other little archaeological sites documented during the 2019 survey and of remarkable historical and cultural interest.

3) To create the complete topographical map of the site of Kom el-Khamaseen and the whole area included in the concession.

The 2021 season of the Spanish-Egyptian Mission at Saqqara Southwest took place between 11 April and 30 May. During this month and a half, our work consisted essentially in the systematic excavation of the site of Kom el-Khamaseen. It is important to remember that this is a rescue archaeological action, since the site has been repeatedly looted in the recent past and its tombs were destroyed. Significant characters from the end of the Old Kingdom and the First Intermediate Period of the Egyptian history (ca. 2400-2050 BC) were buried here, including a high priest of the god Ptah, the main deity of the city of Memphis, at that time the capital of the country.

During the 2021 season, the systematic excavation of the eastern half of the kom, that is to say, the natural mound on which the site is located, was carried out. The western half will be left for next year’s season. The work has allowed us to verify that, at least in the excavated part, there are no tombs left standing. Looting has led to the destruction of the buildings, wells and burial chambers, but the limestone blocks with which they were built or lined, sometimes of great size and weight and with angles and mouldings, lie above and below the sands removed from the site. A total of 435 of these blocks have been recovered, around fifty of which contain important fragments of inscriptions and reliefs. The archaeometric study of these blocks has made it possible to determine that they probably corresponded to two funerary buildings, most likely two mastabas, about 10 m on each side and 3 m high. From one of these buildings, the cuts in the natural ground in which the large blocks that formed the foundations and the first row of walls were placed, as well as the compact fill of the superstructure (the mastaba itself), made of gravel and sand, have been clearly documented.

In addition, in the north-eastern corner of this fill we had the good fortune to make an extraordinary discovery: a complete and intact foundation deposit, consisting of 60 pottery jars with their lids and contents preserved (to be analyzed in the future), 2 alabaster miniature dishes, and 5 stone grinding wheels. A foundation deposit is a ritual set of objects that is buried in the foundations of a building to provide it with eternal protection. The pottery jars allow us to date the deposit, and thus also the mastaba, to the First Intermediate Period. One hypothesis is, therefore, that it is the tomb of Impehor Impy Nikauptah, the aforementioned high priest of Ptah, the best-known character in the necropolis due to the abundance of his inscriptions that have come down to us and which allow us to attribute this date to him. It is therefore possible that the second mastaba corresponded to a character from the end of the Old Kingdom (VI Dynasty), judging by another series of inscriptions and reliefs that have been recovered and which can be dated to this period. To this character, however, no name can yet be attributed, although the inscriptions record various proper names. Some of the fragments of reliefs that may have come from his tomb are of high quality and constitute parts of well-known funerary scenes such as the nobleman hunting and fishing in the marshes.

Two series of blocks or fragments of blocks with inscriptions of the high priest Imephor are particularly important. On the one hand, a set of limestone blocks that formed the gabled roof and walls of what was the underground burial chamber of his tomb. These blocks, inscribed with his names and titles and with other texts typical of the funerary repertoire of the time, such as the list of sacred oils, were uprooted from their original location by the modern looters of the site with their heavy machines and dragged to the north of the kom, where some were abandoned and others (those whose decoration lent itself better to sale on the antiquities market) were cut in situ and then smuggled out of the country. Some of the latter, however, have been detected and documented by us in antiquities galleries around the world and, in some cases, have even been repatriated to Egypt after appropriate police and judicial action. In this way, between the material recovered at the site and that found on the antiquities market, we have been able to make a proposal for the reconstruction of the entire chamber. This reconstruction is in addition to the one we have also made of the mastaba and its foundation deposit, so that we can get a fairly approximate idea of what the original tomb of Imephor as a whole may have been like.

The other series of fragments of blocks from the tomb of Imephor to which we referred is of granite: a hundred or so pieces of what may have been the sarcophagus or architectural elements such as lintels or jambs, which the looters would have reduced to fragments, also for illegal profit. What is certain, however, is that all the granite fragments known today have been recovered from the site, and none have been found in the antiquities market. It is important to bear in mind that granite is a building material reserved exclusively for kingship and the courtly elite, which may give us an idea of the wealth-grabbing capacity that our personage still had at the height of the First Intermediate Period and of his status in the withdrawn Memphite court of the time.

We know that Kom el-Khamaseen was also in use during the Middle Kingdom, but no longer as a necropolis, but as a place of passage and supply. Indeed, we have found numerous fragments of large water storage amphorae at the site, the typology of which is characteristic of the Middle Kingdom. In addition, on some of the large limestone blocks that clad the exterior of the mastabas mentioned, we have documented graffiti carved by different hands, with greater or lesser skill, in hieroglyphic or more cursive writing, even hieratic, many of which reproduce names characteristic of the Middle Kingdom or of a longer chronology but also in use during that period. These may be the names of travelers who frequented the desert at that time and who passed through the area to rest in the shade of the buildings that stood there at that time and to stock up on water. 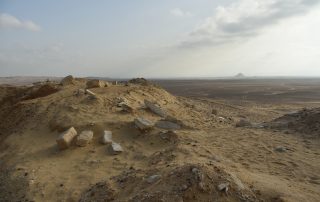 View from the top of the site of Kom el-Khamaseen, with the step pyramid of Netjerkhet-Djeser in the background 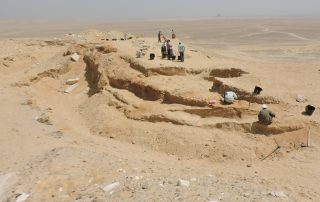 Beginning of the excavation in the eastern sector of the site 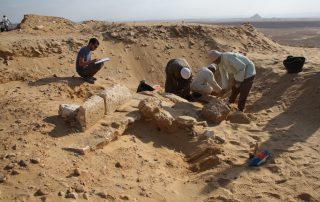 Working on the site 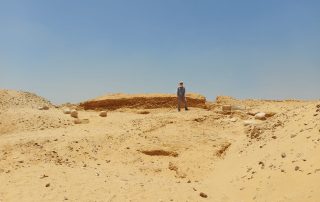 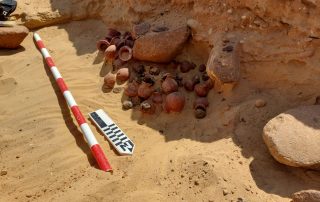 The foundation deposit of the tomb of Imephor Impy Nikauptah 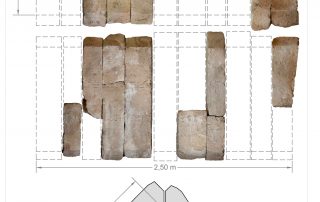