The 2022 season of the Spanish-Egyptian Mission in Southwest Saqqara took place between 17 April and 30 May. It has been a month and a half of very intensive work with highly satisfactory results. Four types of activities have been carried out.

Firstly, the systematic excavation of the site of Kom el-Khamaseen was completed, especially the western half of the site, down to the geological levels in all its sectors. A total of 178 limestone building blocks were recovered from the removed sands of the site, as well as 38 limestone blocks or blocks fragments with inscriptions and reliefs. Most of the latter come from the destroyed burial chamber of the mastaba of Imephor Impy Nikauptah, high priest of Ptah. They are mainly the rectangular, beveled blocks that formed the gabled roof of the chamber, inscribed with two parallel lines of hieroglyphic text with the names and titles of the priest. With the blocks uncovered this year, the ceiling can be reconstructed almost in its entirety and the content of the inscription is now definitively established. But the most important and surprising find at Kom el-Khamaseen was an accumulation of dozens of statuettes of Imephor inscribed with their names on the right arm. They are a type of funerary statuettes without parallel, measuring between 15 and 30 cm in high when complete, of the same type as the 12 already known from the antiquities market and the two recovered at the site in the 2021 season.

Secondly, the second of the two main sites of our concession was excavated. It had been discovered during the survey of the 2019 season, when we gave it the generic name of “Square Building”. Located to the northeast of Kom el-Khamaseen, halfway between the latter and the step pyramid, it is located on a gentle rise of the terrain on the southern slope of the northern wadi of the concession. Excavation has revealed that it was a building measuring 37.5 x 33.8 m, with a well-defined central body and a series of relatively symmetrically arranged corridors and side chambers. The whole is built of mudbrick with limestone elements (thresholds, column bases). An exceptional discovery has been made in the central body: a set of brightly colored paintings which, despite being in a very fragmentary state because they were part of the decoration of the collapsed mudbrick walls, are enough to document royal iconographic motifs: a king wearing an uraeus, a Horus of Behdet with the wings outspread, and a horse and chariot. Since these motifs are clearly associated with New Kingdom kingship by topic and style, and since there is no evidence of any funerary use of the site, we are working on the initial hypothesis that this is a royal complex of a cultic nature dating to this period of Egyptian history. Another essential characteristic of the site is that it is associated with a series of large pottery accumulations (36 in total) provisionally dated to the New Kingdom. All of these accumulations are systematically located to the southwest of the complex and are undoubtedly structurally and semantically related to it. Future research should enable us to clarify the meaning and function of the complex. Work has also pointed to an older and a more recent level of occupation of the site. The most recent dates from the Byzantine period and may have been related to the expansion of the eremitic movement. The older one dates to the Old Kingdom, as corroborated by the pottery (the percentage of sherds of vessels characteristic of the Old Kingdom is very high and statistically significant) and may have consisted of an early cultic building, a precedent of the New Kingdom complex. This is particularly interesting in relation to one of the scientific objectives of the project: the study of the patterns of cultural occupation of the territory during the Old Kingdom and the First Intermediate Period.

Thirdly, a new selective survey of the eastern half of the extensive desert area included in the concession has been carried out in order to document the lithic industry lying on the surface of the desert, which can be preliminarily dated to the Middle Stone Age. This will allow us to reflect on the role that northern Egypt may have played in the routes taken by Homo sapiens to leave Africa in order to colonize the rest of the world, a phenomenon that took place precisely at that stage of the Paleolithic and which is known in the scientific literature as Out of Africa.

Finally, thanks to the incorporation of a geologist to the Mission team, the geological study of the concession territory has been carried out, especially the Kom el-Khamaseen site and the wide northern wadi, with revealing conclusions regarding both the geological composition of the former and the distinction between geological and anthropic levels in it (which repeated looting has mixed up in a capricious way), and the geological structure of the latter, which is at the basis of the cultural occupation patterns of the territory. 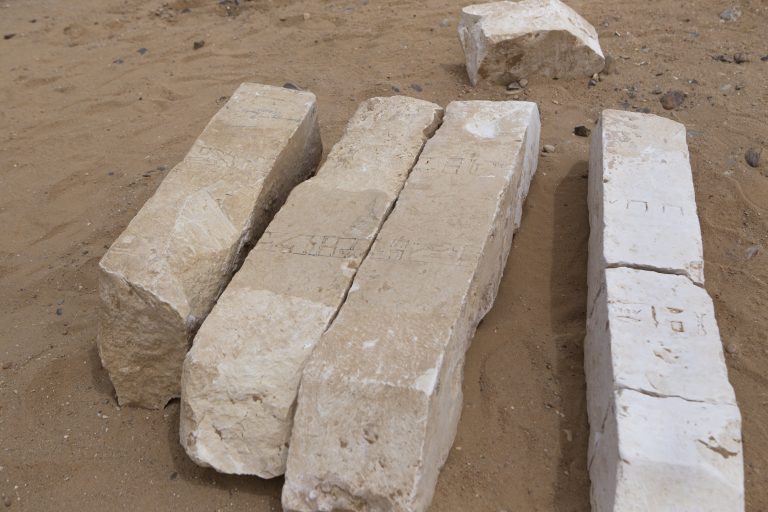 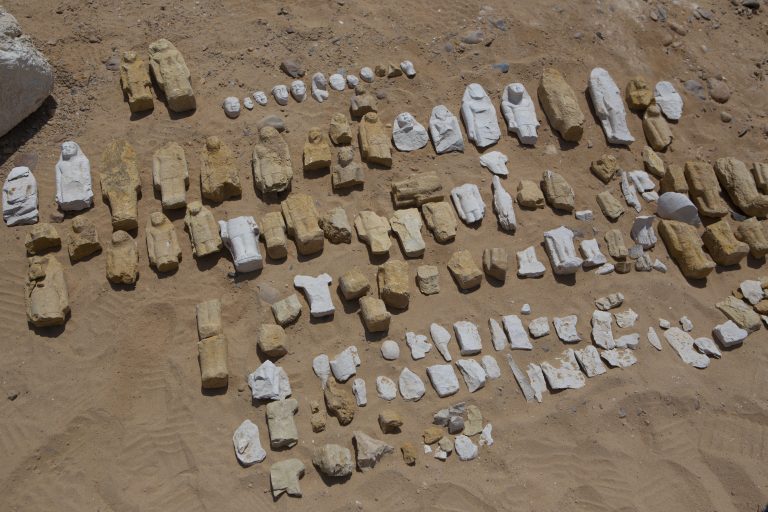 A selection of the dozens of funerary statuettes of Imephor Impy Nikauptah, complete or fragmentary 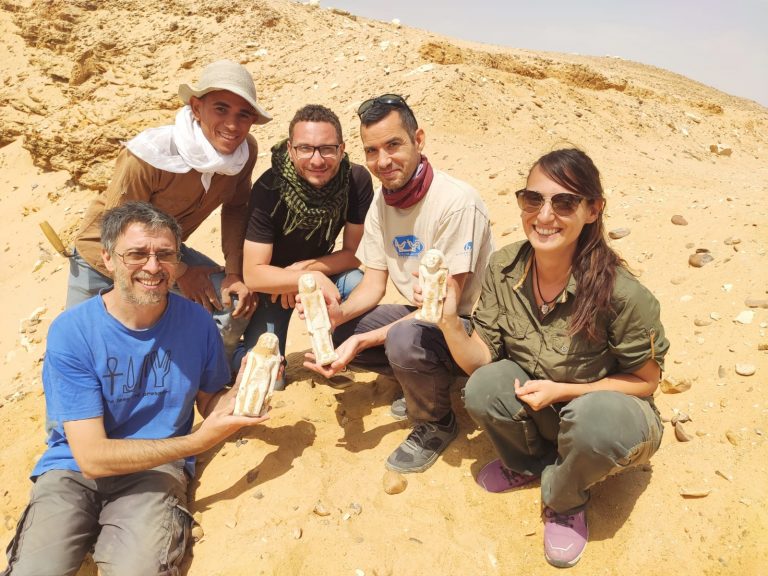 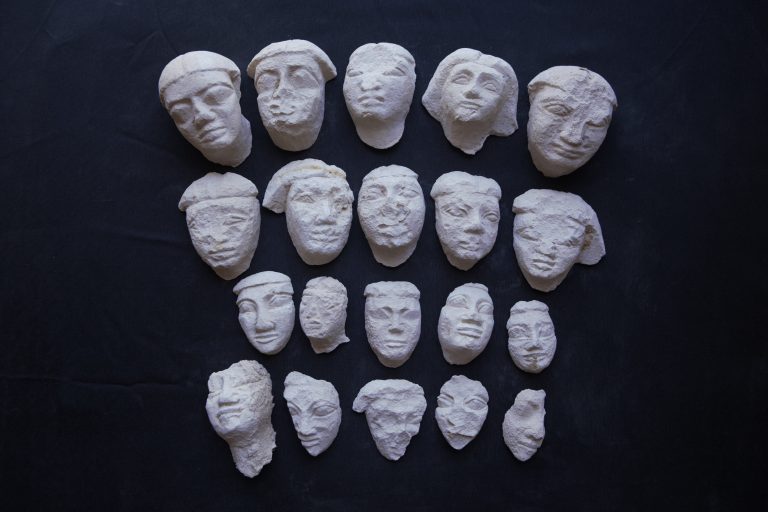 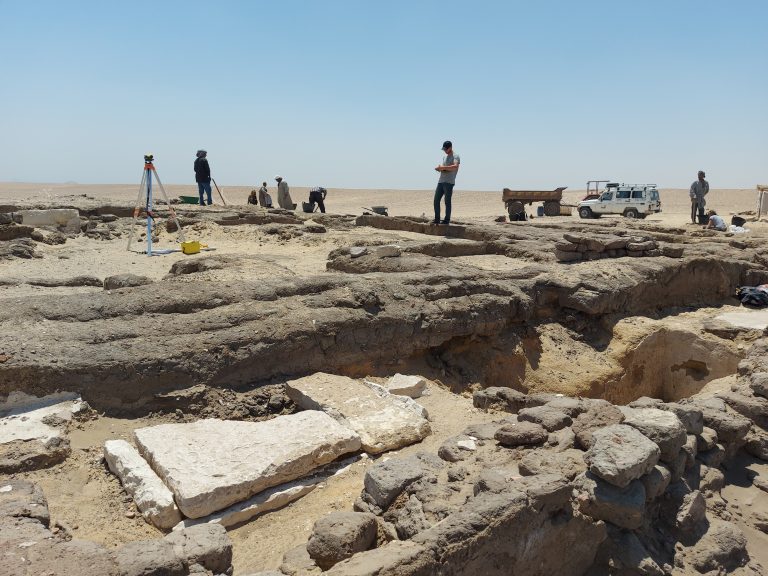 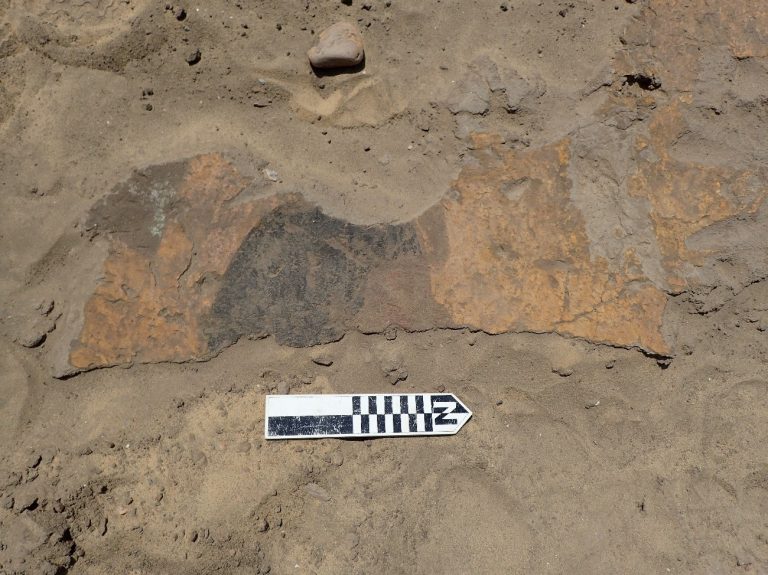 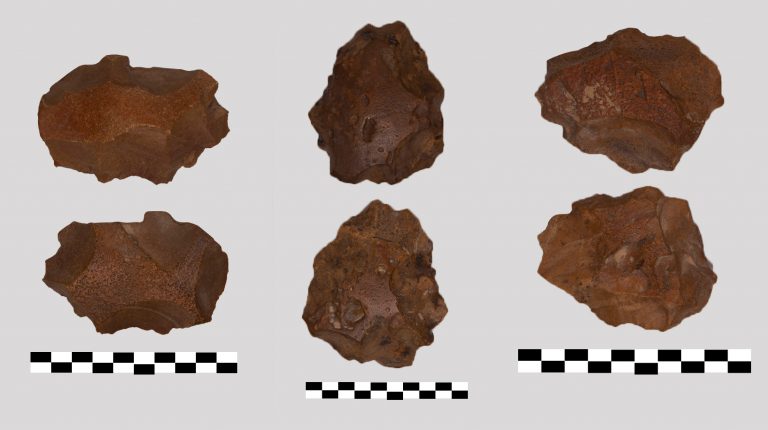