Egyptian co-Director of the Mission and archaeologist 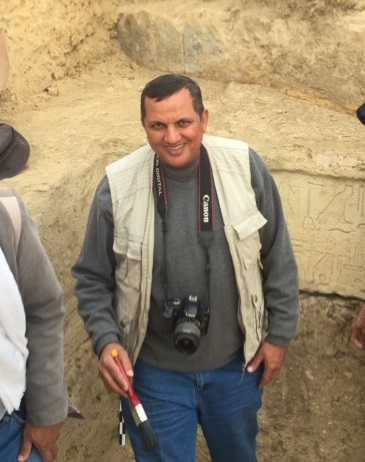 Mohammad Mohammad Youssef Morsy is currently the Director of the Saqqara Antiquities Area of the Supreme Council of Antiquities of Egypt. He holds a Bachelor of Arts in Archaeology and Egyptology from the Cairo University, as well as a Master’s Degree and PhD in Egyptology from the same University. He holds aldo a Guidance Diploma of English from the Helwan University, and he graduated from the Archaeological Field School held at Memphis in 1997 by the American Research Centre in Egypt (ARCE). In 2002 he served as an archaeological supervisor in this same school.

Since 1993 he has carried out several important excavations in Saqqara and Abusir for the Supreme Council of Antiquities of Egypt, as director or the assistant director. He also collaborates in many heritage and topographical projects, as the Egyptian-Italian project for making a risk map of the Saqqara necropolis or the Egyptian-French project for heritage management “Enhancing the Value of Saqqara Archaeological Site”. He was the responsible for the big mission of re-counting and moving the antiquities stored in the magazines to the new museum magazines in Saqqara. Since 1994, he has collaborated with several foreign missions (Australian, Czech, American, Japanese, French, English, Portuguese, German and Polish) in Saqqara, Abusir, Dahshur and Memphis.

The results of his work and research are published in several peer reviewed papers in Egyptological journals and in collective specialized books.a